PHYSICALITY
DOMESTIC CAT | 100% HEALTH
APPEARANCE: a huge creature, four huge limbs wrapped in firm muscle, tall and powerful, with a rippling coat of fur so long that it glitters like cold armor when dipped in winter's frost. earthen hues drip across his sturdy frame, darker mud browns and gentle tans that wrap his underbelly and reach across his throat. one large eye like molten fire glimmers with a warmth that betrays some deep pain hidden somewhere within. one tufted ear rises from a lacerated and mangled skull, where the other sits tangled in scar tissue, shredded by the claws of a monster. teeth glitter where lips were once torn away, an empty socket that once held his second eye, now little more than a shadowed pit carved into the side of his face. large paws come equipped with razor tipped feline talons, a feathery tail sweeping with dusty strands behind a bulky form. the rest of his body is painted like a war-torn canvas, laced by scars who's stories are unknown.
↳ illnesses/injuries: missing one eye, has several deep scars
↳ accessories: none
↳ smells like: wet earth and rain, with a slight fishiness
REFERENCE:

MENTALITY
CHAOTIC GOOD
↳ PERSONALITY: bear appears to be a cold creature of brooding thought. though capable of humor and teasing, he often prefers to maintain a more serious composure, particularly around strangers or foes. after the trauma of a near lethal wolf attack as a softpaw, he has grown seemingly distrustful of the world and the ancestors, and may often be considered a bit too harsh by his allies. nevertheless, Bear Tooth adores his tribe and it's members, and while the sight of wolves strike fear into his quaking heart, he'd swiftly lay down his life for the tribe without hesitation. viewing the needs of the many over the one, it's not uncommon for the huge tom to portray himself as uncaring towards individuals, and his distrust of outsiders breeds an evident discrimination towards newcomers. earning his trust is difficult, but doing so will result in a loyal, and life long friendship.


INTERACTION
POWERPLAYING PEACEFUL ACTIONS: is allowed
↳ open to: friendships, enemies, and most plots
↳ closed to: one night stands, death, critical injury
EASY TO: outrun and outmaneuver
HARD TO: fight head on, get into his head
↳ will.. use dirty tactics
↳ won't.. refuse mercy when asked
↳ may.. kill
POWERS: none
Last edited: Yesterday at 2:20 PM
Toggle signature
[ UNDER THE BANNER OF HEAVEN ]
we dream out loud | tags | rped by sheogorath​

HISTORY
The Tribe of Rushing Water
bear tooth was born in the ancient tribe of rushing water. his mother died while he was young, and as a result of his grief, bear tooth's father became aloof and neglectful, leading to the upbringing of a spiteful youth. as a softpaw, bear tooth was mauled by a lone wolf, and was lucky to survive. unfortunately, he lost half of his face, and an eye to the attack. despite his trauma, bear tooth passed his trials and soon became a sharpclaw. he remained a gruff and outspoken member of the tribe for many moons.

when earthquakes threatened to destroy the mountain, he advocated for the tribe to move to a new home. bear tooth was one many that chose to leave the tribe's ancestral home, eventually settling on the moor, and merging with the group of local wind runners. during this event, he started a budding relationship with snake thorn, though the two toms soon had a falling out. shortly after, bear tooth meets jinx, and a new crush is born.

bear tooth is present when the dying former stoneteller, gray wolf, pronounces sunshine the new stoneteller of the tribe. sunshine, whom gray wolf renames to bright shine, promises to look after the tribe on his behalf.

when gray wolf dies, bear tooth blames himself, feeling guilty for pushing the tribe to cross a thunderpath during the journey. it was on this thunderpath that gray wolf was hit by a car, his leg shattered. said injury would eventually claim the former stoneteller's life. additionally, bear tooth begins to grow untrusting of the tribe of endless hunting, after a failed attempt to contact the ancestors at the moonstone. nevertheless, he remains a prominent member of the wind runner group.

weeks after the tribe settles in, a cat named birdy, who is well known in the group for her ability to use herbs to heal, much like a stoneteller, goes to the moonstone once again. she is contacted by the recently deceased gray wolf, who informs her that he is watching over them as the first member of starclan, an alternative to the ancient tribe of endless hunting. birdy returns to camp to inform everyone of this, and bear tooth is present at the time of the announcement. surprised, the brute silently agrees to give gray wolf a second chance, and as a result, is willing to accept starclan's guidance.

WindClan
as a result of gray wolf's contact, birdy becomes the first medicine cat. bear tooth doesn't quite understand the significance of the role, but he respects it, nonetheless. shortly afterwards, windclan is born, when bright shine is contacted by the newly made starclan, and given the name brightstar. bear tooth feels uncertainty when tawny is announced as windclan's first deputy. a part of him still doesn't feel like the moor is home.

shortly afterward, bear tooth is attacked by a dog. his shoulder is badly wounded, but he lives to feel the frustration of his trauma. Time continues to pass, and one day, Bear Tooth is forced to defend himself and his newfound clan during a raid mounted by savage foxes. He emerges from the battle mostly unscathed, but his spite toward the stars begins to mount as spiritual tensions rise. Growing distasteful of WindClan leadership, Bear Tooth grows solitary, and spends most of his time alone, dreaming of a better world.

one night, during a storm, bear tooth is almost crushed by a fallen tree branch. he curses gray wolf and starclan, and determines that starclan is no longer worth his loyalties. returning to camp, bear tooth begins to ponder on his recent actions, a guilt melting in with the coldness. his recent struggles had made him cruel towards the world. the tom decides that he needs to do better, despite his distaste for his situation.

shortly after those events, bear tooth admits his feelings for jinx, and in return, she tells him that she likes him back. shortly afterward, the two agree to become mates. around the same time, more strangers join the ranks of windclan, prompting discomfort from the brute. he fears that the moor will no longer be able to sustain such a large group of cats. then, in a tragic turn of events, wolverine bite is taken by twolegs, leaving bear tooth to grieve.

not long after wolverine bite is taken, bear tooth discovers a dead mother laying next to her one surviving kitten. this child would come be known as softkit, and bear tooth, though conflicted, looked upon her with a fatherly eye. shortly afterward, bear tooth puts his feelings for starclan behind him, and decides to dedicate his life to the faith. this huge turning point was perhaps inspired by the grief of losing wolverine bite, and the maturity that came with such trauma.

one day, the clan discovers the corpse of a sick vole. they also notice a decrease in the local prey population. fears and doubts began to fill bear tooth's mind as they soon find even more diseased creatures. shortly after these discoveries, a band of starving rogues attack a hunting patrol that bear tooth had been on. this leads to an all out brawl between the loners and windclan, in which brightstar loses one of her nine lives. though bear tooth is only minorly injured, his mate, jinx, is critically wounded in the fight. these events strengthen bear tooth's faith in starclan.

weeks later, sick prey is still being found around the moor. jinx has finally awoken, and brightstar has implemented a mentorship system within windclan. bear tooth is given an apprentice named otterpaw to train into a warrior, and he eagerly accepts the responsibility. for some time, there is peace, until raven's cry is killed by a hawk. after the vigil, bear tooth struggles with nightmares of the event, along with other painful parts of his life. he's plagued with guilt for days, but manages to drag himself out of the depression by keeping close to friends and family.

tawnydove, the deputy, goes missing shortly afterward. sick prey continues to appear on the territory. bear tooth decides to join icecatcher's patrol across the gorge and into the wetlands, to fish the river for freshwater prey. the fish is unaffected by the mysterious illness, making it a steady source of food for the windclanners that bear tooth sought to protect. bear tooth gives fishing lessons to those that need it, and often treks back and forth, from the wetlands, to the windclan camp, with his maw full of fish. the near constant traveling is difficult and exhausting.

over time, the patrol establishes a camp in the wetlands, and Bear Tooth begins struggling with conflicting emotions. He loves the wetlands more than he likes the moor, but is hesitant to betray brightstar's trust by moving out of windclan. as he helps the patrol build what should have been a temporary camp, the tom begins to feel comfortable on the river, and doesn't want to leave. he invites his mate to stay with him, and continues to struggle with feelings of disloyalty toward his clan.

his guilt only grows worse when other cats began to voice their desire to stay in the wetlands. tensions rise among the fishing patrol, as it becomes clear that not everyone is willing to return to the hot moors.

RiverClan
eventually, riverclan is formed, with the blessing of the stars, and icecatcher, who has become wary of those she considers traitors to windclan, is chosen as the new leader. she becomes icestar. bear tooth is uncertain of his feelings for this, though he respects the calico for her kindness, he knows well enough that she thinks him treacherous and unworthy of trust, along with all the others that chose to remain in the wetlands.

bear tooth settles in as best he can, but the wary glances and cold glares make his fur prickle with regret. still, he works hard, all too aware that some did not appreciate his efforts. sticking to the background, bear tooth watched on as riverclan grew and prospered. billy earned his warrior name, and became the medicine cat apprentice, and his children grew in their newfound home. slowly but surely, life seemed to be getting better, and bear tooth's guilt became a sensation of the past.
Last edited: Yesterday at 2:04 PM
Toggle signature
[ UNDER THE BANNER OF HEAVEN ]
we dream out loud | tags | rped by sheogorath​ 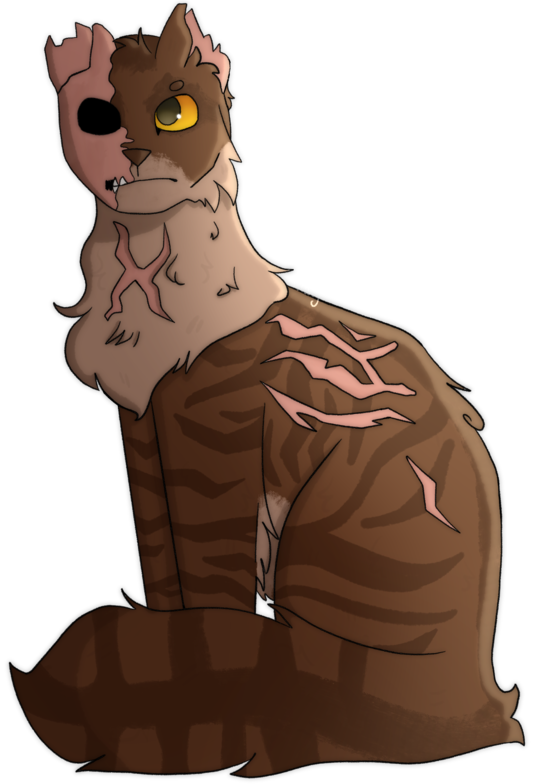