PERSONALITY:
Will be explored further as she's born and grown. For the most part, Sleepy Willow will be a somewhat ditzy, bubbly personality in the tribe. Though, she also seems to be constantly tired, yawning and finding excuses to go and nap. Sometimes, she can be slightly work-averse, though it's never out of a place of malice. She's just very spacey. I'll update this later 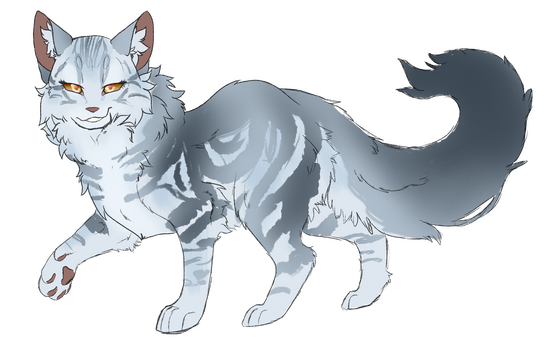 PERSONALITY: Cloud Wisp has always been an adventurous little thing, wanting to figure out every secret the land had to offer. He's incredibly ambitious, but unfortunately, he can be a little dumb sometimes. He's very naïve. and is easily manipulated. Loveable himbo, wants to climb the ranks and one day lead the tribe. Crazy little gamer I'll update this more later BRIEF HISTORY:
-- Father died before she was born
-- Mother (Panther Heart) was an absentee mother, except for when it was convenient for her.
-- Mother manipulated Pumpkin Patch as soon as she was old enough to understand
-- Mother wanted to usurp power from Eagle Sight, and wanted to use Pumpkin Patch to do it
-- "The tribes are evil, Eagle Sight killed your father, anyone who trusts him is stupid" the kinda thing she'd tell her (all lies)
-- Pumpkin Patch believed her mother, and together, the two made a plan to "do what was right"
-- Panther Heart told Pumpkin that they'd kill Eagle Sight and then run away together right after the next winter.
-- In reality, Panther Heart was going to have Pumpkin do the dirty work, blame her, get her exiled/killed, and take over via force.
-- Thankfully, Panther Heart was killed by a different Sharpclaw before any of this plan could come to fruition.
-- Pumpkin doesn't know what her mother was lying about, and what she was telling the truth about


Code:
get an accurate code later

Cinnamon is from a line of paragons. Her parents were killed by poachers, so the humans who took care of her were pretty much the replacements. When the humans found her, with her tiny wings and feathered body, they were shocked. Shocked, but they took great care of her. Cinnamon grew up to see humans as friends, and things to be loved, rather than automatically the enemy. That being said, she also didn't know bad humans existed. When she was first bitten and turned sentient, Cinnamon had originally planned to continue living with her human parents - except for the fact the Hellion who bit her had also killed the humans who used their last energy to try and protect Cinnamon. For a bit, she was consumed with rage, and did a few things she regretted (aka - killing a few Hellions), until she came across the Cityscape. She found solace in finding other creatures like her... But couldn't take their hatred of humans. Not long after, Cinnamon discovered the Hideaway, and quickly moved there permanently. She's been living there since she was only thirty moons, or about three years.
Last edited: Nov 16, 2020
Toggle signature 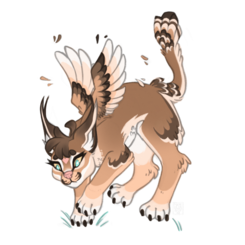 ❝ SOMETIMES ALL I THINK ABOUT IT YOU ❞


PHYSICALITY
WATER DEER X WHITE TAILED | 100% HEALTH
APPEARANCE: cosette is a mutated water deer x white tailed deer hybrid. she inherits most of her appearance from her father, a water deer who was also somewhat mutated. her mother, the white tailed deer, does influence her appearance slightly. she inherits her wings and front paws from her father, while her single horn comes from her mother. her fox tails were a recessive gene carried by both parents. she appears to be almost a pureblooded water deer, if not from her slightly longer legs and skinnier disposition. she has a single, long horn, much like that of the fabled unicorn. her front hooves have mutated into fully-functional paws, with her normal stubby tail replaced with multiple fox tails. currently, she has two - with a third beginning to grow in. the one mutation that was not noticed from birth was her wings, which began to sprout when she was about 6 months old. they are currently fully-functional. she has black, beady eyes.
↳ illnesses/injuries: none currently
↳ disorders: minor depressive disorder, adhd
↳ accessories: a small bow tied around her neck
↳ smells like: french vanilla & royal incense
AESTHETICS: waking up late on a sunday morning, the feeling of rainfall against a windowpane, the elation one feels after winning a competition, the annoyance young children bring, the frustration of trying to teach someone a new language.


MENTALITY
ESFP | GRYFFINDOR | CHAOTIC GOOD
↳ PERSONALITY: wip as a roleplay her
cosette is a very childish creature. raised by a father and mother who spoiled her, she has been known to act rather selfishly and like a spoiled brat because of this. like the modern-day lapdog, cosette, despite her size, believes that she could beat any creature in a fight without even having to try. cosette is an incredibly annoying breath of optimism and kindness. while she is selfish, it's never intentional. she's used to being a spoiled only child. having suddenly been thrust in a new world, with a whole bunch of people she now has to care for... it's an adjustment. add more later


HISTORY
BRIEF OVERVIEW: born in a secluded forest somewhere near the outskirts of the hideaway with her two parents. the two of them were cityscape refugees who weren't lucky enough to find the actual hideaway. they were happy for a while, until they quickly realized that living like this wasn't sustainable. they were surviving off scraps even in the spring and fall... they had no idea what the next winter would bring. so, they left, taking little cosette with them. they ended up back in the cityscape, much to her parents' dismay. cosette loves the cityscape though, another fact her parents strongly dislike, but can't do anything about really. her parents, whose relationship had been strained the entire time, finally split once they felt cosette was safe in the cityscape without them.
↳ important events: moved to cityscape at 10 months
parents divorced at 11 months
↳ future plots:
romances??
shit with leon from the hideaway
cosette finding the hideaway by accident and ending up an honorary member