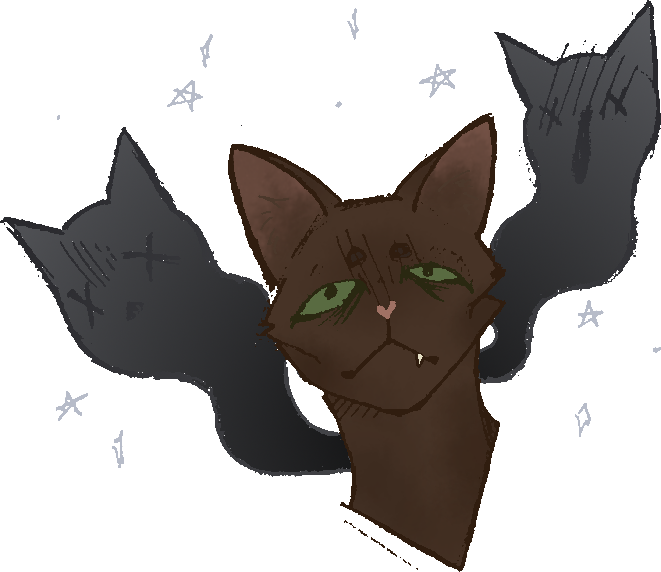 — rot is on the shorter, stouter side of his combined breeds. thin shadows of tabby lines striping up his legs, body, and tail; like bark on a solid cinnamon-brown pelt. dry rot has a long parading tail, with an almost frizzy appearance. a strong contrast from his fur on the rest of his body, tight and clutching to lean muscle despite obvious length. large paws, nose, and muzzle, freakishly disproportionate to his small frame. his eyes and ears are wide-set from the rest of his facial features. moldy green eyes flat against his skull. the inner ear, large protruding nose, and paw pads all a contrasting peachy pink flesh. one tooth overhangs his lips, longer than his other canine.

— many healed scratches to face

messy draft ignore:
dry rot is timid and fearful. with his unique upbringing, he believes wholly that no one can share in his experiences and life. in his world, there only exists him and his family. taught from infancy to not trust anyone but drowned visions, and his siblings. this lack of trust for anyone not sharing direct blood ties makes conversation and small talk more a task than anything. all others hold judgment and shame, and will quickly jump to conclusions about him. so rather than try to change this image, he remains secluded from social pastimes and enjoyment. disconnect and paranoia of his fellow clanmates force him into a shy and reclusive lifestyle. interest in his behavior and history drags up anxiety, and dodgy yet truthful answers. only lying to protect the structure of his mother’s tightly woven family dynamic. dry rot comes across as emotionless from a lack of expression. when growing emotional, it's due to great passion. when agitated he displays erratic, manic behaviors.
dry rot greatly believes in alienating from a moral baseline of "right and wrong", rather searches for the effect certain actions will have.
dry rot is truly all or nothing, deliberate with every choice. he likes to do things with the maximum amount of efficiency and excellence, especially when he truly cares about the goal. though he can quickly grow irritable if a task has no personal appeal, and dislikes following commands blindly.
desires strongly to make a noble name for him and his blood. has immense guilt when failing or disappointing his mother by shaming her in any way. his self-assumed responsibility.
careful and exact, dry rot doesn’t like things that don’t make sense to him. puzzles set forth to challenge any level of preparation. surprises and mistakes are above all the greatest obstacles in the way of his success. physicality has never made sense to dry rot, the brutality of needless violence so gruesome. much more willing to practice with what he considers to be more practical pursuits.

— will not start fights / will flee / no kill/maim

can powerplay peaceful or nonviolent actions (medical with OOC permission)

HISTORY​
BACKSTORY
BIRTH - 4 MOONS​
— dry rot is put plainly, a bastard litter. drowned visions using his father's temporary weakness against him to produce a pregnancy, dry rot, dark skies, black snake, and spitting viper. dry rot and his siblings are raised isolated from other clanmates. taught that they are above all others, manipulated into believing his father wished to have nothing to do with them.
- birth 04-04-2021 [thread]

— healing style: apathetic and only when necessary